Earlier this Autumn we were invited by freelance journalist, Scheenagh Harrington, to be interviewed for Living France magazine. Scheenagh interviewed Julia and then wrote up a wonderful double page spread about the latest developments at Studio Faire.

Words by Sheenagh and photos by Colin Usher, of course!

(Read the full article below the images). 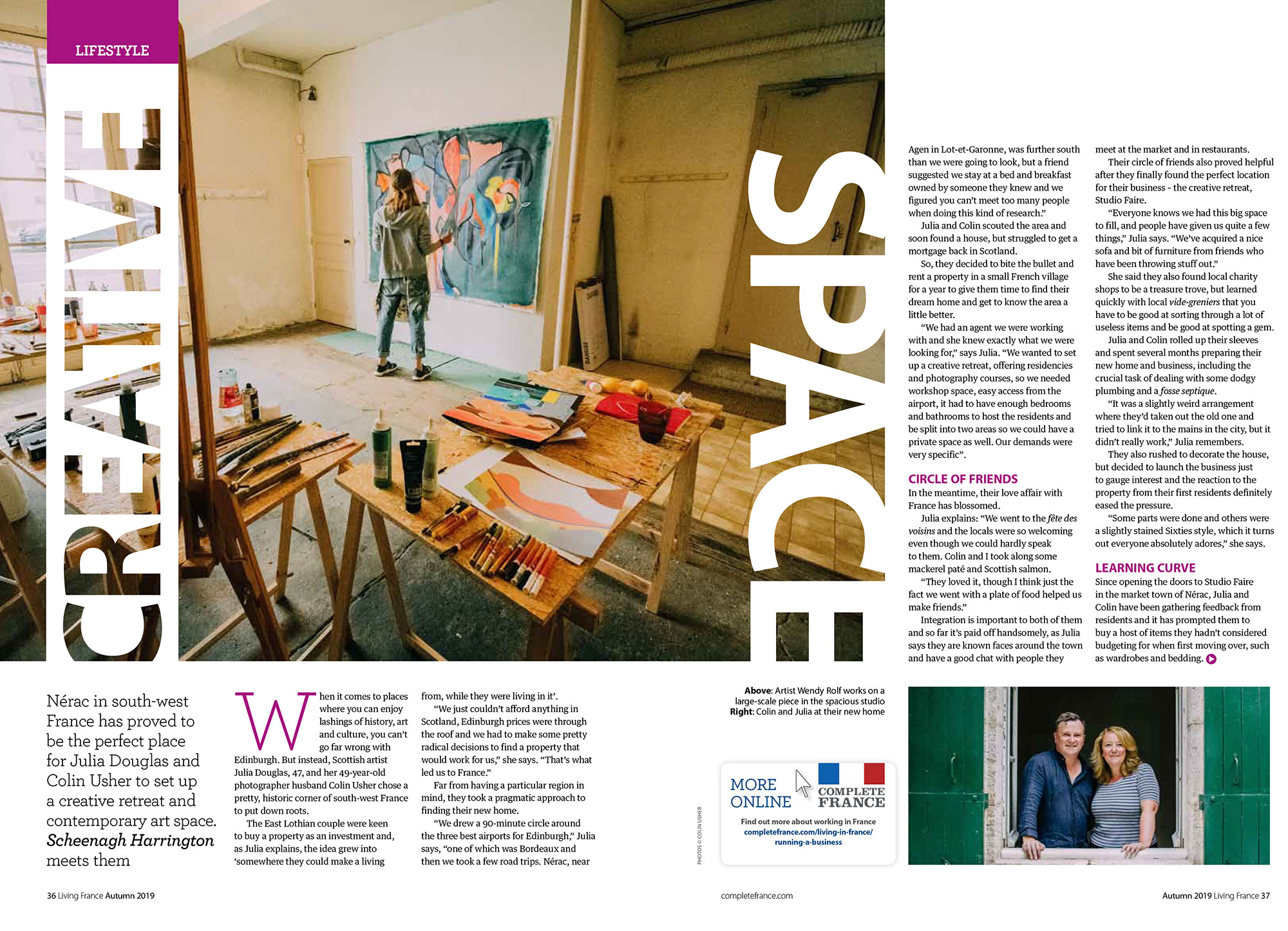 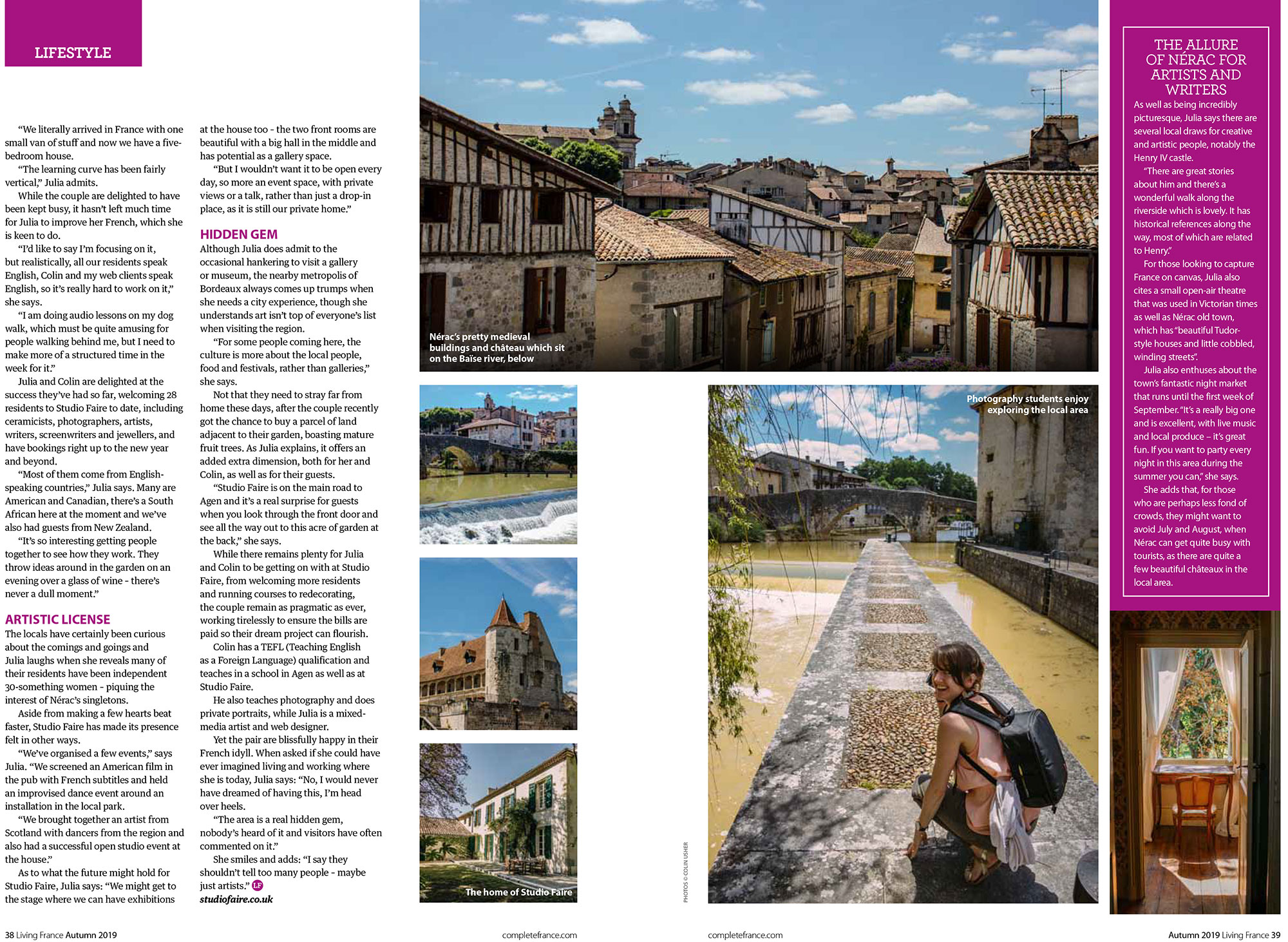 Nérac in south-west France has proved to be the perfect place for Julia Douglas and Colin Usher to set up a creative retreat and contemporary art space. Scheenagh Harrington meets them.

When it comes to places where you can enjoy lashings of history, art and culture, you can’t go far wrong with Edinburgh. But instead, Scottish artist Julia Douglas, 47, and her 49-year-old photographer husband Colin Usher chose a pretty, historic corner of south-west France to put down roots.

The East Lothian couple were keen to buy a property as an investment and, as Julia explains, the idea grew into “somewhere they could make a living from, while they were living in it.

“But we just couldn’t afford anything in Scotland, Edinburgh prices were through the roof, and we had to make some pretty radical decisions to find a property that would work for us. That’s what led us to France”.

Far from having a particular region in mind, they took a pragmatic approach to finding their new home.

“We drew a 90-minute circle around the three best airports for Edinburgh,” she says, “one of which was Bordeaux, and then we took a few road trips. Nérac, near Agen, was further south than we were going to look, but a friend suggested we stay at a B&B owned by someone they knew, and we figured you can’t meet too many people when doing this kind of research”.

Julia and Colin scouted the area and soon found a house, but struggled to get a mortgage back in Scotland. So, decided to bite the bullet and rent a property in a small French village for a year to give them time to find their dream home and get to know the area a little better.

“We had an agent we were working with and she knew exactly what we were looking for,” says Julia. “We wanted to set up a creative retreat, offering residencies and photography courses, so we needed workshop space, easy access from the airport, it had to have enough bedrooms and bathrooms to host the residents, and be split into two areas so we could have a private space as well. Our demands were very specific”.

In the meantime, their love affair with France has blossomed. Julia explains: “We went to the fête des voisins and the locals were so welcoming even though we could hardly speak to them.

“Colin and I took along some mackerel paté and Scottish salmon. They loved it, though I think just the fact we went with a plate of food helped us make friends”.

Integration is important to both of them, and so far it’s paid off handsomely, as Julia says she and Colin are “known faces around the town and have a good chat with people we meet at the market and in restaurants”, while their circle of friends also proved helpful after they finally found the perfect location for their business, the creative retreat, Studio Faire.

“Everyone knows we had this big space to fill,” she says, “people have given us quite a few things. We’ve acquired a nice sofa and bit of furniture from friends who have been throwing stuff out”. She said they also found local charity shops to be a treasure trove, but learned quickly with local vide greniers that “you have to be good at sorting through a lot of rubbish, and be good at spotting a gem”.

Julia and Colin rolled up their sleeves and spent several months preparing their new home and business, including dealing with some dodgy plumbing and a fosse septique. “It was a slightly weird arrangement where they’d taken out the old one and tried to link it to the mains in the city, but it didn’t really work”, Julia remembers.

They also rushed to decorate the house but decided to launch the business just to gauge interest, and the reaction to the property from their first residents definitely eased the pressure.

“Some parts were done, and others were a slightly stained Sixties style, which it turns out everyone absolutely adores”, she says.

Since opening the doors to Studio Faire, Julia and Colin have been gathering feedback from residents, and it has prompted them to buy a host of items they hadn’t considered budgeting for when first moving over, such as wardrobes and bedding.

“We literally arrived in France with one small van of stuff and now we have a five-bedroom house. The learning curve has been fairly vertical”, she admits.

While the couple are delighted to have been kept busy, it hasn’t left much time for Julia to improve her French, which she is keen to do. “I’d like to say I’m focusing on it,” she says, “but realistically, all our residents speak English, Colin and my web clients speak English, so it’s really hard to work on it.

“I am doing audio lessons on my dog walk, which must be quite amusing for people walking behind me, but I need to make more of a structured time in the week for it”.

Julia and Colin are delighted at the success they’ve had so far, welcoming 28 residents to Studio Faire to date, including ceramicists, photographers, artists, writers, screenwriters and jewellers, and have bookings right up to the new year and beyond.

“Most of them come from English-speaking countries,” she says. “Many are American and Canadian, there’s a South African here at the moment, and we’ve also had guests from New Zealand. It’s so interesting getting people together to see how they work. They throw ideas around in the garden on an evening over a glass of wine – there’s never a dull moment”.

The locals have certainly been curious about the comings and goings, and Julia laughs when she reveals many of their residents have been thirtysomething women – piquing the interest of Nérac’s singletons.

Aside from making a few hearts beat faster, Studio Faire has made its presence felt in other ways.

“We’ve organised a few events,” says Julia. “We screened an American film in the pub with French subtitles and held an improvised dance event around an installation in the local park. We put together an artist from Scotland with dancers from the region, and also had an open studio event at the house”.

The latter could hold a hint of what the future holds for Studio Faire, as she says: “we might get to the stage where we can have exhibitions at the house too, the two front rooms are beautiful with a big hall in the middle and has potential as a gallery space. I wouldn’t want it to be open every day so more possibly an event space, with private views or a talk, rather than just a drop-in place, as it is still our private home”.

Although Julia does admit to the occasional hankering to visit a gallery or museum, the nearby metropolis of Bordeaux always comes up trumps when she needs a city experience, though she understands art isn’t top of everyone’s list when visiting the region. “For some people coming here, the culture is more about the local people, food and festivals, rather than galleries”, she says.

Not that they need stray far from home, after the couple recently got the chance to buy a parcel of land adjacent to their garden, boasting mature fruit trees. As Julia explains, it offers an added extra both for her and Colin, as well as for new guests.

“Studio Faire is on the main road to Agen and it’s a real surprise when you look through the front door and see all the way out to this acre of garden at the back.”

While there remains plenty for Julia and Colin to be getting on with at Studio Faire, from welcoming more residents and running courses to redecorating, the couple remain as pragmatic as ever, working their socks off to ensure the bills are paid so their dream project can flourish.

Colin has a TEFL qualification and teaches in a school in Agen and at the property, where he also teaches photography and does private portraits, while Julia is a mixed-media artist and web designer.

Yet the pair are blissfully happy in their French idyll, and when asked if she could have ever imagined being where she is today, Julia says: “No, I would never have dreamed of having this, I’m head over heels. The area is a real hidden gem, nobody’s heard of it and visitors have often commented on it”.

She smiles and adds: “I say they shouldn’t tell too many people – maybe just artists.”

The allure of Nérac for artists and writers.

As well as being incredibly picturesque, Julia says there are several local draws for creative and artistic people, notably the Henry IV castle. “There are great stories about him, and there’s a wonderful walk down the riverside which is lovely. It has historical references along the way, most of which are related to Henry”.

For those looking to capture France on canvas, she also cites a small open-air theatre that was used in Victorian times, and Nérac old town, which has “beautiful Tudor-style houses and little cobbled, winding streets”.

Julia also enthuses about the town’s “fantastic” night market that runs until the first week of September. “It’s a really big one and is excellent, with live music and local produce, it’s great fun. If you want to party every night in this area during the summer you can,” she says.

She adds that, for those who are perhaps less fond of crowds, they might want to avoid July and August, when Nérac can get quite busy with tourists, as there are a few beautiful chateaux in the local area.

This website uses cookies to improve your experience. We'll assume you're ok with this, but you can opt-out if you wish. Read More